Do something in honor of Mars, which is going direct on May 19th after 70 days of being retrograde. Mars goes retrograde every 2 years, and started to go retrograde most recently on March 1st. As a result, everything has been slow. With Mars going direct, we feel the energy. Everything which was waiting to happen… will now finally happen.

Mars is the planet of action, will, war, determination, sex and conflict.

When Mars is retrograde we are surrounded by a slow-motion type of energy, and we tend to procrastinate; our powers of determination and action diminish.

People under this influence don’t make decisions at a normal pace; for example if you are waiting to be hired for a job, you may not have a response while Mars is retrograde.

With Mars going direct, relationships will become more passionate. If you are dating someone casually, you may decide to move in together or you start to make serious plans for the future.

So on the 19th of May, finish all the tasks you have been postponing, call someone out on a date, or make a decision and take the reins of a situation. Because now, we get back the power of action, determination and will.

Celebrate! It’s a fantastic shift for all of us. 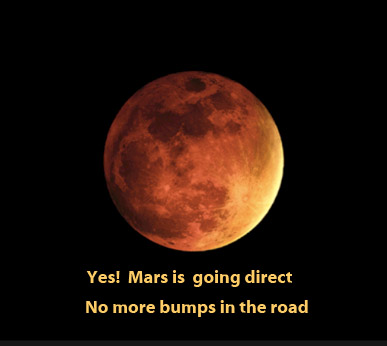